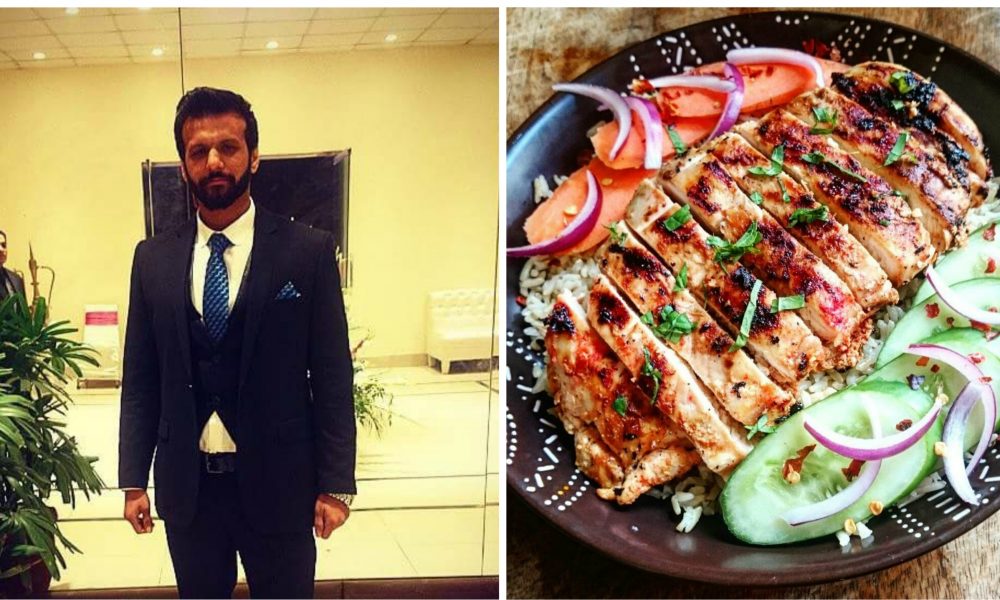 Life comes with a number of ups and downs – the road to success is never easy. The ride of life is filled with bumps and eventually, after much dedication and sweat of hard work, the path becomes straight and clear.

While reading this article, one may think about their own hardships and struggles. Keep in mind that only you are the judge of understanding the magnitude and intensity of every struggle you face. Same is what happened with Umar Mansoor, known as Chef Shamsher on his social accounts.

When life gave Shamsher hurdles, he didn’t back out, he didn’t stop. Instead, he kept for fighting for himself and for his loved ones till the point where he discovered a hidden talent he now masters – cooking.

Here is how Shamsher illustrates his story:

“It started with tragic circumstances. As I just graduated and was looking for work, my mother was diagnosed with cancer. Losing my father in my teens was already too much of scar on me and this completely shattered me, but being the eldest in my family, I decided to leave everything else and look after my mother till she’s back on her feet again.

A year into her treatment, we had changed 4 different cooks because of various reasons. I was home taking care of my mother and not doing anything else. Eventually, I decided I should cook for her myself. So I began cooking on her instructions.

From how much salt to how to use the pressure cooker she told me everything which would form my basis for the kitchen. I kept on cooking regularly for 2 years until she became better and took over everything again. These 2 years made me realize that how much effort our mothers put into taking care of us, the entire family, how much they are underappreciated and taken for granted. No doubt, the most powerful being in this world is a mother.

My mother was a strict critic as she would tell me one the very first bite that if she’s going to take the second bite or not. It was a delight cooking for her as her smile (when she enjoyed the food) was priceless and her criticism (Punjabi juggats and taunts) was also priceless.

Time passed and I started posting pictures of food that I made on social media. One day this person from twitter told me that “Your food may be delicious but it is zero in the presentation.” This pinched me to a level that I started watching a lot of tutorials and I used to visit kitchens of different restaurants to see how proper chefs used to decorate the meals and I picked it up from there. I started using Snapchat at that point so whenever on the weekend I would make something I would do a snap-story of the whole process.

Am I hot or the weather? The answer to this question is a never ending debate but it is definitely hot enough to make me hate cooking. So I’ll try my best to share quick recipes all season just like this one Crevette A La Marseillaise which is a French pasta recipe made in creamy tomato sauce topped with shrimps seared in Paprika and tomato paste. Recipe – http://chefshamsher.blogspot.com/2016/04/crevette-la-marseillaise.html subscribe my blog chefshamsher.blogspot.com like my page Facebook.com/chefshamsher

I’ve never been to Thailand but I’ve been to Bangkok and surprisingly people there eat a lot of Thai food. I was joking, that’s what you call sarcasm and being lame. Anyway I know you ladies feel butterflies whenever you see tamarind so this one is for you all. Thai Tamarind Shrimps. Recipe Link – http://chefshamsher.blogspot.com/2016/03/thai-tamarind-shrimp.html subscribe to my blog chefshamsher.blogspot.com like my page Facebook.com/chefshamsher follow me on instagram.com/mastcalander add me on snapchat – Shamsher1

Never thought of doing a blog until Shumail (from twitter) suggested it and a friend, Namra Khan told me to name it “Cooking for Dummies”. I chose the name Cooking for Dummies as my blog elaborates and explains the recipe in a step by step procedure.

With the passage of time, people started calling me ‘chef’ though I in my personal opinion am just an occasional cook who happens to know how to make more than 250 dishes. In 2015, thanks to a friend Hurmat Majid who got me in touch with a number of well-known news publishers.

While haters cry about still being in contact with their ex because they can’t help it I write articles about food in The Express Tribune. This is the Top 5 places for Iftaar to try out in Lahore, yes I’ve shown some love for my city here. P.S all of these places are so expensive even I don’t have enough money to try out even one of them. Read this articlr online @ http://tribune.com.pk/story/1120178/5-iftar-places-try-lahore/

Right now, my blog has more than 130 recipes, all with detail and pictures of each and every step. In the future, I plan to publish a cookbook of my mother’s favorite recipes that I made.

Many people suggest me to open up a restaurant or do home deliveries but that is not the point of my blog; the point of my blog is to encourage everyone to cook and to be dependent because no matter what gender we are or in what age we are, it is something which is very important and it also makes you independent on a whole different level.

With learning how to cook I also encourage people to take care of their health by exercise and eating healthy. I love to cook for my family and friends, but definitely, when I will be experienced enough I would like to open up my own restaurant and serve everyone.”

One can learn from Shamsher how he learned from the moment when no one could even think about learning something, aside from taking care of someone they are about to lose.

Before closing this tab, take a look at Cooking Expert Shamsher’s amazing work:

I always wanted to name something after me. Never thought it would be pakoras. These are Shamsher’s Special Pakoras. Nothing extra ordinary but tasty nonetheless. This recipe is dedicated to @notarmanii because she reminded me of Pakoras at a time when I thought something’s missing from my life. P.S this recipe will help establish rishta prep for many ladies who don’t know. Recipe Link – http://chefshamsher.blogspot.com/2015/06/shamshers-special-pakora.html